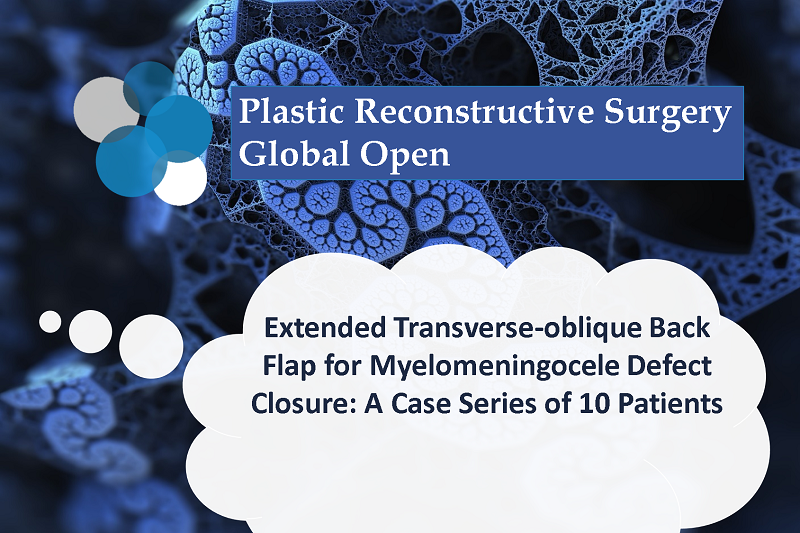 Extended Transverse-oblique Back Flap for Myelomeningocele Defect Closure: A Case Series of 10 Patients

Myelomeningocele is the most common phenotype of congenital neural tube defects. Various reconstructive techniques have been described for soft tissue coverage following myelomeningocele repair, one of which is the use of dorsal intercostal artery perforator based flaps. The aim of this study was to describe our experience with the use of a transverse-oblique back flap that can be reliably extended to the anterior axillary line for closure of myelomeningocele defect. This pedicle transposition flap is based on thoracic or lumbar paraspinal perforators that originate from the dorsal intercostal arteries.

This is a retrospective two center case-series where all patients who underwent myelomeningocele defect closure with extended transverse-oblique flap over three years period were included. Patients’ clinical data, surgical variables, and outcomes were documented and analyzed using descriptive measures. Flap harvest technique is also delineated in the present study.

Ten newborns (7 baby girls and 3 baby boys) who underwent a surgical closure of the myelomeningocele defect with an extended transverse-oblique back flap during the first week of life were included in the analysis. The defect was most commonly located in the lumbosacral area (50%) followed by the lumbar area (40%), with an overall average surface area of 22 ± 8.32 cm2. Common encountered complications include venous congestion to the distal part of the flap and minor wound dehiscence of less than 0.5 cm, all were managed conservatively. There were no incidences of flap loss or full necrosis. Primary closure of the donor site was possible in all cases.

In the current series, the extended transverse-oblique back flap provided a safe and reliable coverage for myelomeningocele defect. Such a flap does not jeopardize other regional fasciocutanous or musclocutaneous flaps that might be needed for soft tissue coverage later in life for this population. It also obviates the placement of skin suture line over the repaired neural tube, thus yielding a durable coverage with no major complications or functional disability.

To read the full article: bit.ly/3pWfup0