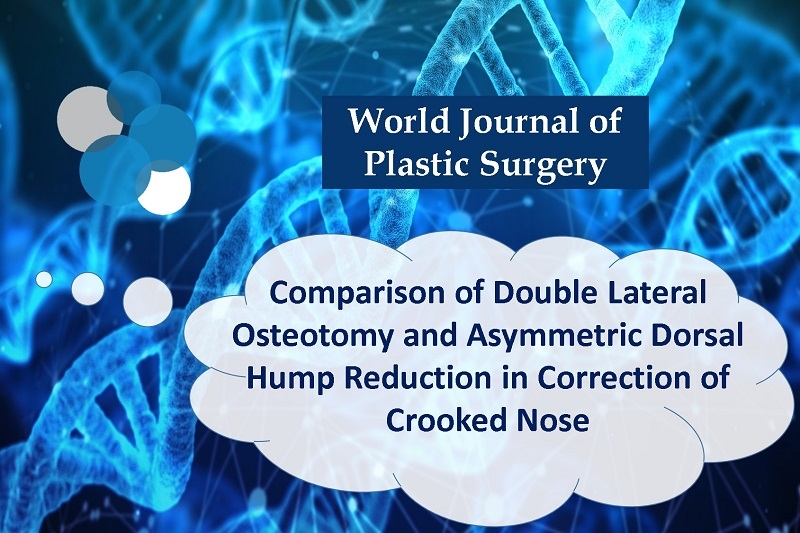 Background
Several methods have been introduced to correct crooked nose during rhinoplasty. This study aimed to compare the final shape of nasal pyramid as well as patients’ satisfaction of the outcomes in two different rhinoplasty techniques.
Methods
Participants in this study underwent rhinoplasty with two different techniques of double lateral osteotomy in comparison with asymmetric dorsal hump reduction using rasp. Ninety patients were allocated in two groups by a quadruple block randomization. Patients were compared for the correction of nasal deviation 6 and 12 months after surgery. Their self-rated satisfaction with rhinoplasty outcome was also assessed using a researcher-made questionnaire.
Results
Crooked nose correction was performed in 45 patients in each surgery group. Primarily, the mean of nasal deviation in two study groups were relatively similar (159.83±22.37 degree in C-shaped group vs. 11.79±4.98 degree in I-shaped group). The changes in degree of deviation after rhinoplasty were statistically significant in both intervention groups. However, based on the shape of nasal curvature, double lateral osteotomy was superior in long term follow up in I-shaped curvatures. Patients’ post-operative satisfaction with their nasal appearance was higher in the group of double lateral osteotomy and they were less interested in re-surgery.
Conclusion
The two rhinoplasty techniques were not statistically different in terms of changes in nasal deviations correction after the surgery. However, long term changes in I-shaped curvatures were more desirable in group of double lateral osteotomy. Use of double lateral osteotomy was associated with better satisfactory aesthetic outcomes among study participants.

To read the full article:bit.ly/3unBY5o