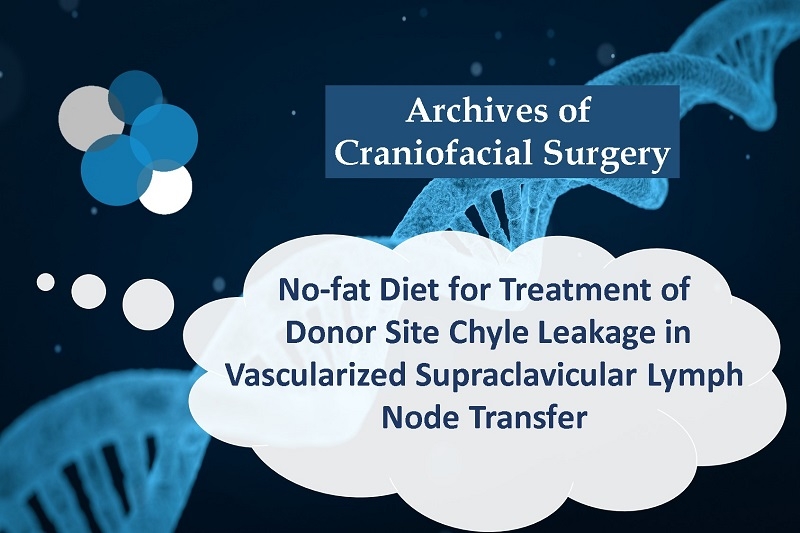 Supraclavicular lymph node (SCLN) flap is a common donor site for vascularized lymph node transfer for the treatment of lymphedema. Chyle leakage is a rare but serious complication after harvesting SCLN flap in the neck. We report a case of chyle leakage at the SCLN donor site and its successful management. A 52-year-old woman underwent SCLN transfer for treatment of lower extremity lymphedema. After starting a regular diet and wheelchair ambulation on the 3rd postoperative day, the amount of drainage at the donor site increased (8–62 mL/day) with the color becoming milky, which suggested a chyle leak. Despite starting a low-fat diet on the 4th postoperative day, the chyle leakage persisted (70 mL/day). The patient was started on fat-free diet on the 5th postoperative day. The amount of drainage started to decrease and the drain color became more clear within 24 hours. The drainage amount remained less than 10 mL/day from the 8th postoperative day, and we removed the drain on the 12th postoperative day. There was no seroma or other wound complications at follow-up 4 weeks after the operation. The current case demonstrates that a fat-free diet can be a first-line treatment for low output chyle leakage after a SCLN flap.

To read the full article:bit.ly/3rUQ7oL