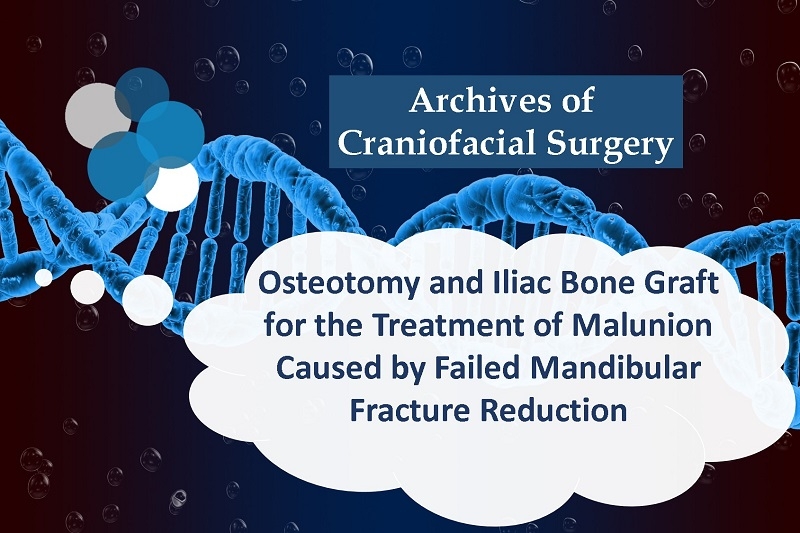 This report describes osteotomy and iliac bone graft for malunion caused by failed mandibular fracture reduction. A 27-year-old man was referred 3 months after a motor vehicle accident. At another hospital, two operations had been performed for symphyseal fracture using two resorbable plates. Malocclusion was noted, and panoramic radiography and computed tomography revealed a misaligned dental arch, with a 9.37-mm gap between the central and the lateral incisor of the left mandible. A wafer was made from the patient’s dental model, and a maxillary arch bar was applied. Through a lower gingivolabial incision, osteotomy was performed between the malunited symphyseal fracture segments. Both segments were reduced to their original position using the wafer and fixed with titanium miniplates via intermaxillary fixation (IMF). The intersegmental gap was filled with cancellous bone from the iliac crest. The gingival defect was covered with a mucosal transposition flap from the gingivolabial sulcus. IMF and the wafer were maintained for 5 and 9 weeks, respectively. At postoperative week 13, the screws were removed from the mandible and satisfactory occlusion was noted. His mouth opening improved from 2.5 to 3 finger breadths (40 mm). This case demonstrates the need for sufficient IMF when using resorbable plates.

To read the full article:bit.ly/2NdvPYR