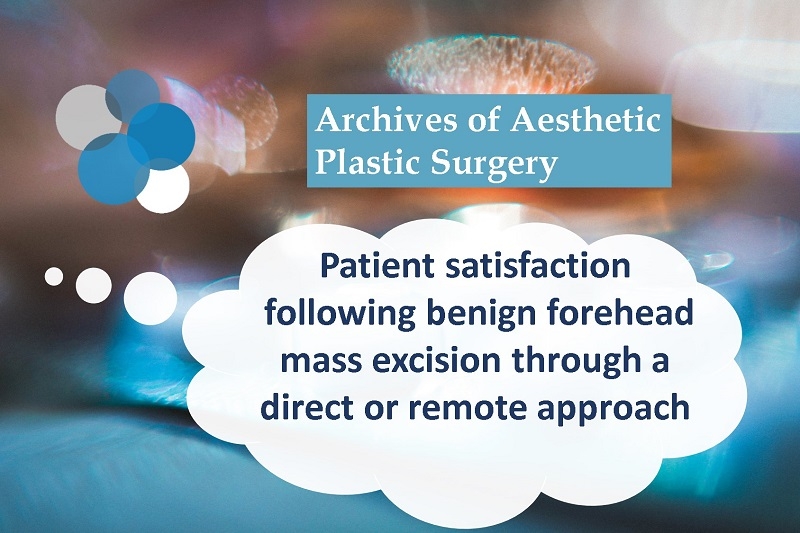 Background
Benign tumors of the forehead are highly prevalent and can cause facial asymmetry, discomfort, and psychological issues for patients. Generally, excision is performed via an incision directly over the mass, which can produce suboptimal cosmetic outcomes. Many methods involving remote incisions have been developed to conceal scars at the hairline. This study compared patient satisfaction after remote and direct incisional approaches.
Methods
We retrospectively enrolled 122 patients who underwent forehead mass excision at our clinic between January 2010 and May 2019 and compared the remote and direct removal of benign forehead lesions. Data on demographics, tumor size, operative time, imaging method, the incidence of complications, and pathological results were collected. Patient satisfaction was assessed via a telephone survey. The complications monitored included hypoesthesia due to nerve injury, wound dehiscence or necrosis, hematoma or seroma, and recurrence.
Results
A total of 79 patients underwent direct-approach mass excision, and 43 underwent excision with a remote approach. Lipoma was the most common tumor (70 patients), followed by osteoma (26 patients). Statistical analyses with the Mann-Whitney and Fisher exact tests revealed significantly higher satisfaction among the remote-approach group than among the direct-approach group (P<0.05).
Conclusions
From the perspective of scaring and complication, the group that removed forehead mass through remote approach had significantly better results than the group that removed through direct approach. However, patients’ perception of scar visibility strongly influenced their satisfaction. Therefore, a remote approach should be considered for patients who are concerned about cosmetic outcomes, and the patient’s hairstyle should also be considered.

To read the full article:bit.ly/3atuuVq