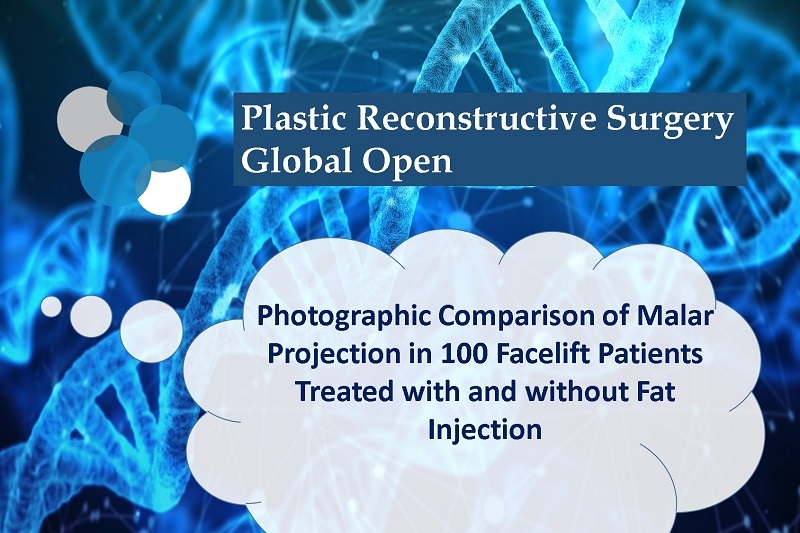 Facelifts are frequently combined with fat injection to restore volume. However, the efficacy of simultaneous fat grafting has not been objectively evaluated in a large number of patients that includes a control group. This study was undertaken to fill this gap in our knowledge base.

A retrospective comparative cohort study was undertaken among 100 patients who underwent a subsuperficial musculoaponeurotic system facelift with (n = 61) or without (n = 39) simultaneous malar fat injection. Rigorously standardized photographs were obtained 1, 3, and 6 months after surgery, including oblique photographs with the nasion aligned with the far inner canthus. Malar projection and area were measured with the assistance of a computer imaging software.

Fat injection produced a significant (P < 0.001) increase in right and left malar projection. The mean increase in projection was 3 mm, significantly greater than control patients, who also demonstrated a significant (P < 0.001) but more modest (<1 mm) increase. Malar projection was significantly correlated with the fat injection volume (P ≤ 0.001). The increase was sustained at follow-up times up to 6 months, and 1 year in a smaller patient cohort (n = 44), with no evidence of a decline or rebound. The calculated fat retention was 34%.

Fat injection at the time of a facelift effectively adds malar volume, and this increase is sustained at time points up to 1 year after surgery, consistent with the cell survival theory.

To read the full article: bit.ly/399SJat