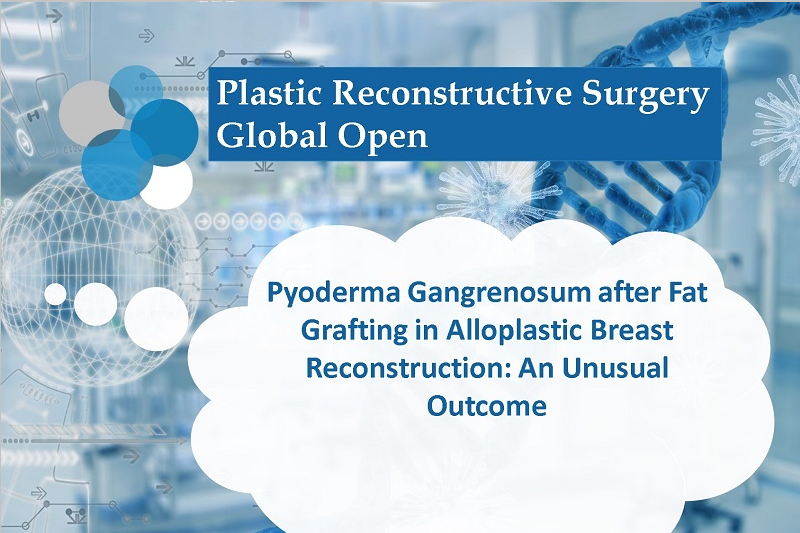 Pyoderma gangrenosum (PG) is a rare and painful inflammatory skin disorder that has been recently associated with breast surgery. It is commonly mistaken for postoperative ischemia or wound infection and does not show response to antibiotics or debridement. We describe the first case of post-surgical PG (PSPG) after alloplastic breast reconstruction involving fat grafting. A 47-year-old woman underwent bilateral mastectomy and 2-stage alloplastic breast reconstruction, with fat grafting from the abdomen. Two days post-surgery, she developed bilateral erythema with tender grouped pustules that progressed rapidly into necrotic ulcerations. She did not respond to antibiotics and serial debridement. Subsequent biopsy confirmed a diagnosis of PG. She was started on steroid therapy and responded well. She was discharged on a steroid regimen, local wound care, and eventually a T-cell inhibitor. Over the next 12 months, her wounds healed without surgical intervention. PSPG has been observed in a variety of reconstructive breast surgeries, but never reported in the setting of fat grafting. As PG involves subcutaneous fat, fat grafting may accelerate and exacerbate the course of disease. Treatment for PSPG includes systemic steroid therapy or other immunomodulatory agents (or both). Surgical management remains controversial, as serial debridement and reconstruction have shown to exacerbate and stimulate disease progression. A long-term follow-up is recommended to monitor for wound healing. Delayed diagnosis of PG in breast reconstruction patients can lead to severe morbidity and disfigurement. This is first case of PSPG following fat grafting in the literature.

To read the full article: bit.ly/39bruMR